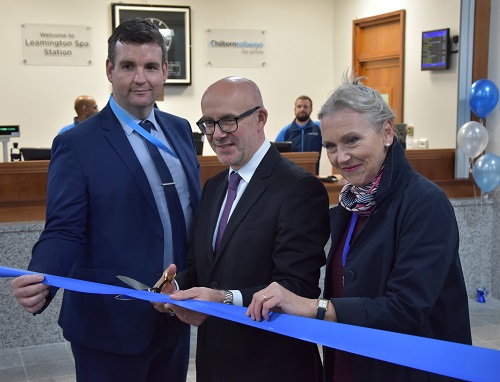 The new open plan ticket office designs at both stations will help improve customer service and allow Chiltern staff to offer better information and ticket retailing to customers. Additionally an extension has been added on to Warwick Parkway station to create a brand new waiting area, as well as remodelling of the forecourt and a new coffee shop. Both stations also now benefit from new LED lighting, part of a wider project aimed at reducing Chiltern Railways’ carbon footprint.

Matt Western, MP for Warwick and Leamington said, “It’s fantastic to have this investment from Chiltern Railways. Between Warwick Parkway and Leamington Spa there has been a significant amount of money committed to improving these stations and I think the passengers and staff will notice an immediate difference. They are both more spacious, light and welcoming. The performance and success of a company really comes down to how the customers rate it. The fact that Chiltern Railways received 92% customer satisfaction in the latest NRPS results, making them the top franchise train operator in the country, speaks volumes. The delivery team have done a great job making these projects a reality, and with Friends of Leamington Station working closely with Chiltern and Network Rail to improve everything about the station, it really does look fantastic.”

Chiltern Railways Customer Services Director Alan Riley said, "We’re committed to improving our stations for our customers to continue to make them a pleasant place to be. The redevelopment work at both Warwick Parkway and Leamington Spa stations is part our continued investment in our stations and we’re proud to unveil these improvements. We hope our customers will be pleased with the refurbishments.”

Archie Pitts, Chair of Friends of Leamington Station said, “We’re really impressed with how the station looks following the refurbishment work. Everyone involved has done a fantastic job and it fits with the style that has been here since 1939.”